skip to main | skip to sidebar

Thousands of girls at IIMPACT have passed class I and joined class II this year. Many of those who completed class V have joined formal schools in class VI - this year their number of graduates is 762!

You will soon meet some of the outstanding performers:

This year the number of girls who have successfully completed class V from IIMPACT is 762. As a point of reference the first batch of 75 IIMPACT girls had passed class V in 2006 and joined formal schools from class VI, this number has gone up in successive years and this year alone 762 girls have passed and a majority are ready to join class VI.

Join us to congratulate all these girls and wish them success in the future!

We thank all our donors for making all this possible – their steadfast support is hugely motivating and inspirational.

Posted by www.iimpact.net at 12:29 AM No comments: 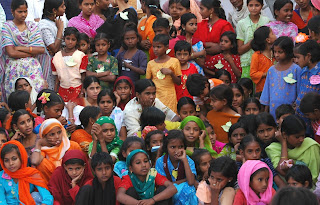 OUR GIRLS SHINE ONCE AGAIN!

There is an air of excitement across IIMPACT centres in Alwar. This year 463 girls appeared for the Class 5 examination in Rajasthan, 302 girls obtained Ist division and all who appeared have cleared Class 5 . This is a 100 % result!

Our coordinator in Alwar says- "The Class 5 syllabus is not that easy but our girls really worked hard, our teachers worked overtime, mothers did not involve their daughters in household chores and the fathers blessed them as they sat on the charpoys keeping an eye when the extra classes were on. Magnificent collective effort and the results are for all of us to see."

Our best wishes to all the girls!

Posted by www.iimpact.net at 11:08 PM No comments:

IIMPACT Secures A Spot On GlobalGiving.Org

We are pleased to share that IIMPACT has successfully secured a permanent spot on the international charity website GlobalGiving.org. In order to qualify to be listed on GlobalGiving, IIMPACT had to complete their Open Challenge - which required us to raise $4000 from 50 donors by April 30th. We are thrilled to report that we successfully met both fundraising targets and are right now in the 9th place - among 247 competing charities - for donations, with $9180 raised so far, and in 27th place for number of donors, with 63 donors. Here is the link to our page on GlobalGiving.org http://www.globalgiving.org/projects/iimpact-educating-the-girl-child-in-india/
You can also view the current rankings of all the charities at http://www.globalgiving.org/dy/v2/leaderboards/global-open-challenge/index.html?showAll=true
Publish Post
We thank all our supporters for making this happen.
Posted by www.iimpact.net at 8:22 PM No comments: 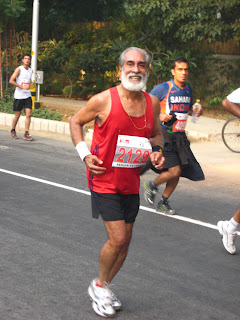 CT are all very excited and wanted to share with you that IIMPACT is being represented at the Boston Marathon. Many thanks to our ardent supporter P.S. Viswanathan (or Vish, as he is known to all of us) for expressing his support to us this year in such a unique and laudable manner - by running theBoston Marathon on April 18, 2011! Vish is pledging all funds raised to IIMPACT.

At 64 Vish continues to achieve new heights - he is running his 7th complete 42km run in Boston on the 18th of the month and as always, is supporting a cause he truly believes in.
So while Vish trains and runs and succeeds, it would mean a lot if you could follow the link below, read his pledge, and encourage people to donate however much you can towards this goal.
We at IIMPACT applaud him for this effort and invite you to cheer him on as well, reaffirming your belief in him and your solidarity with IIMPACT, educating the girl child.
Here's the link:
http://www.iimpact.net/2011/03/28/p-s-viswanathan-to-run-boston-marathon-for-iimpact/
You can keep track of news related to Vish and the Marathon on our website www.iimpact.net.
It would be great if you could circulate this information amongst your family and friends in order to help lend additional moral support to Vish through your network.

Get your friends to be part of the IIMPACT story.
Posted by www.iimpact.net at 3:47 PM No comments:

Vikas Patnaik and his family visit IIMPACT centres in Mewat ...his experience in his own words 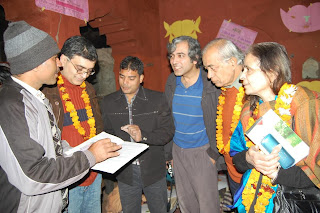 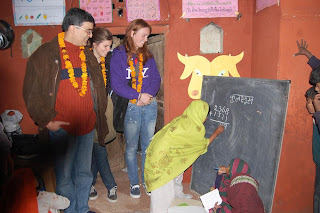 Walking into the first center was like walking into a temple. There were throngs of people there to greet us – children, their parents, village elders – all with smiles and the same glint of hope in their eyes. They garlanded us to welcome us. I was moved to tears. We entered a very old room, painted in red, with cracked walls and a faint natural light diffusing in from outside, where the little girls sat in line, their backs against the walls, their heads covered in shawls to bear the fierce cold, their eyes peering into us with a heartwarming mix of curiosity and shyness. Upon instruction from two young and very able teachers, the girls then performed songs, recited poems, solved arithmetic problems on a small blackboard in the corner – all with an uplifting confidence, rarely faltering – offering a glimpse of a future, secular India, and reaffirming the notion that no country can truly progress until its women are educated and empowered.

The second center was a few miles further south, in another small village with no paved roads and no proper sewage system. This center was painted a lush blue; recently so, I found out, thanks to one of the oldest women of the village, who now lives all by herself with no one to look after her. Again the same overwhelming welcome, the positive energy and the humanity, the air so full of hope and posing the question again and again in my mind – how is it that utter deprivation preserves the innocence of the human spirit? In addition to the children’s routine of poems, reading and math, blankets were distributed at this center, in the hopes that the girls would be able to fend off the looming cold from the surrounding mustard fields.

If there is such a thing as a religious experience, this was it.

Posted by www.iimpact.net at 10:26 PM No comments:

To Change the World, Invest In Girls

An article in the current issue of Time Magazine, titled “To Fight Poverty, Invest in Girls“, talks about the importance of investing in girls to reduce poverty and disease in the developing world. Across most of the developing world, very few girls are educated and most end up tending house, cleaning and cooking by the age of 12. In parts of Africa, less than 1 in 5 girls make it to secondary school. Almost half are married by the time they are 18 and 1 in 7 are married by the time they are 15. It is shocking to learn that the leading cause of death worldwide for girls aged 15 to 19 is complications from pregnancy.

This vicious cycle can be broken easily by education. Just an extra year of primary schooling for girls results in 10% to 20% better wages for them. Studies have found that girls who stay in school marry later and have fewer children. And girls and women who earn an income, end up investing 90% of it in their families – compared to only 30% to 40% for men. Although the benefits are huge it is surprising that less than 2% of development funds go towards girls and 90% of youth programs are designed for boys. While there are many factors for this neglect it is partly because of cultural attitudes towards girls across most of the world. This is slowly changing but a lot more needs to be clearly done.

The article is very relevant to the work being done by IIMPACT and lays out a very compelling case for our own mission to educate girls in the rural and backwards regions of India. You can view the original article at Time.com by following this link: http://www.time.com/time/magazine/article/0,9171,2046045,00.html.

Posted by www.iimpact.net at 10:47 AM No comments:

Responding to popular demand, the site at www.iimpact.net has been revamped with many new features and services.

On the home page you will see a new layout and easy to use menu - simply click on the drop down menu to reveal items of interest. With short news reports and stories about IIMPACT girls highlighted, you will see this content changing more frequently.

You can click on information links in the 'Get Informed' menu group and 'Get Engaged' enables you to sign up for site updates, contact us or support us with a donation.

Now you can also connect IIMPACT more easily into your FaceBook, Twitter and other social networks, so your friends know what great work you are doing with IIMPACT!

Finally, you will soon see an online payment service that will enable you and your friends to make donations with a credit card - did you know that even small donations can change a girl's life and 100% of your donation goes towards her education?

Do email us or post to this blog with your suggestions for our - no, your website!
Posted by www.iimpact.net at 11:27 PM No comments:

our volunteers at work

An IIMPACT school in Jharkhand

www.iimpact.net
An initiative of alumni of the Indian Institute of Management, Ahmedabad. Our mission is to mobilize and motivate non school going girls, between the ages of 6 and 14, from economically and socially backward rural areas of India, and put them firmly on the track of literacy through quality primary education.